New Mexico’s cuisine, often lumped together with other regional fare, has its own unique DNA.

Nothing burns our burritos like hearing people—including otherwise knowledgeable foodies—refer to New Mexico’s cuisine as “Tex-Mex” or “Mexican.”

The confusion is understandable to a point. Yes, we share staples—chiles, posole, tortillas, and beans, for instance—but our only-in-New-Mexico spin is a centuries- old distillation of Native foraging and cultivation, Spanish colonial imports, and a long period of geographic isolation, before the railways began offloading edibles from elsewhere.

“It’s really important to understand that New Mexican food, as similar as it is to Mexican in some respects, grew up independently,” says Bill Jamison, co-author with our culinary editor Cheryl Alters Jamison of Tasting New Mexico: Recipes Celebrating 100 Years of Distinctive Home Cooking (Museum of New Mexico Press). “There was little influence back and forth between what is now New Mexico and Mexico in the 17th and 18th centuries. A wagon train would come up every two or three years and bring nice things for the rich folks in the area, but not for the general population. Chile became a dominant feature in this period of isolation.”

That’s why when you walk into a classic New Mexican restaurant, or are lucky enough to sit down at a traditional New Mexican home-cooked dinner, you won’t be served a Oaxacan tamale filled with chicken mole and wrapped in a banana leaf. You also won’t be eating crispy-shelled tacos filled with refried beans and topped with shredded Velveeta and sour cream, followed by fried ice cream. You’ll tuck into some of this: stacked red chile enchiladas, green chile stew, chiles rellenos, pinto beans, chicos, carne adovada, a basket of sopaipillas or horno bread, and natillas (custard topped with cinnamon) or biscochitos for dessert.

Chile, of course, is the most essential—even sacred—ingredient in New Mexican cuisine. Like France does for its wine grapes and cheeses, “We pass legislation protecting our chiles. You can’t grow a New Mexico chile in Texas,” says Santa Fe–based Kiowa chef Lois Ellen Frank, author of the James Beard Award–winning Foods of the Southwest Indian Nations (Ten Speed Press).

Along with their vibrant color and flavor, chiles have always brought a lot to the table. “Ancestral indigenous people knew two things,” Frank adds. “Chiles have flavor, and they have medicine.” Along with vitamin C, they contain capsicum oil, which is now found in over-the-counter pain-relieving ointments. “The spiciness releases feel-good endorphins in the brain,” she says. “Chiles were also used to kill bacteria during the curing of meat to make jerky.”

In a state so beautiful that it daily makes visitors lose their minds, abandon their regularly scheduled life, and relocate here, an accurate understanding of New Mexican food is the litmus test that separates the newbies from folks whose roots go back centuries. Tip: Never spell it “chili” unless you’d like someone to tell you to go back to Texas.

1. Green Chile If this state didn’t have such a strong Catholic identity, we’d probably all bow down to statues of green chile and regularly attend green chile houses of worship. Wait—many of our restaurants probably fit that description.

Apart from dried green chile, year-round green chile is actually a relatively recent development; before refrigeration, the young form of the New Mexican chiles could be enjoyed only until they matured into red ones. Hatch is the best-known source, and it’s a region and a brand, not a specific type. Arguably the best-known variety is Big Jim, named after the late Hatch chile breeder Jim Lytle.

Found in green chile stew. Move over, chicken noodle soup. This stuff is New Mexico’s penicillin—and ultimate comfort food. Chopped chile, pork, onions, garlic, and potatoes are the usual building blocks. also: green chile chicken enchiladas, green chile cheeseburgers (see below), breakfast (and regular) burritos, candy, and even beer—almost anything, when you get right down to it.

2. Green Chile Cheeseburgers The bun is crusty, or cheek-soft, or brioche-flaky. The meat is rich, the patty pancake-flat or ovoid. We add a layer of cheese (usually Jack or Cheddar), maybe some bacon, and the elevating showstopper, green chile—diced, sliced, or whole wilted. It’s our default lunch or dinner choice, our tower of power, our point of pride, our fat stack, our singular source of go-to satisfaction, our comforting panza plumper.

What makes it ours? It wasinvented here, and the green chile seals the deal. Our state has a Green Chile Cheeseburger Trail with almost a hundred options (although there are many more).

3. Chiles Rellenos Take a New Mexico green chile, stuff it with Jack cheese, dip it in thick cornmeal batter, and fry it. Served with chile and more cheese, they’re best eaten before a strenuous hike, although a nap might be more appealing.

What makes it ours? New Mexico chiles are used; Mexican rellenos’ batter is thinner and eggier.

4. Red Chile If green chile is like a zippy, fun sauvignon blanc, then red chile is like petite sirah: earthy, extracted. Not only does it eat off a woman’s lipstick, it replaces it with its own rusty stain. The mature form of green, its smoky ballast is the yang to green chile’s yin. Some swear it’s a great hangover cure. You’ll find red chile dried in the form of pods, flakes, or powder, and it’s incorporated into sauces, not served whole. Lots of people order “Christmas,” both red and green, to get the best of both worlds. Chimayó red is a top pick.

Found in carne adovada, stacked red chile enchiladas (see recipe), as a sauce over huevos rancheros, and in chocolate.

5. Carne Adovada Pork slow-braised in a spicy red chile bath for hours, then served on its own, folded into burritos, dolloped on savory breakfast dishes, or in omelets.

What makes it ours? The red chile.

6. Stacked Red Chile Enchiladas with a Fried Egg (see recipe below) This was the most-cited ultimate New Mexican meal in a recent Facebook post, which corroborated Bill Jamison’s recommendation.

What makes it ours? “Mexican enchiladas aren’t as heavily sauced,” Cheryl Alters Jamison says, and of course, the key ingredient is our red chile.

7. Huevos Rancheros Two eggs over easy, atop tortillas, smothered with chile and surrounded by whole beans and smattered with cheese—this breakfast handles the hunger of cowboys and desk jockeys alike.

What makes it ours? Blue corn tortillas under the eggs, red and/or green chile ladled on.

8. Blue Corn A Native staple, usually ground, it provides 20 percent more protein, has a lower glycemic index, and is sweeter than yellow or white corn. Corn is sacred here; in Pueblo jewelry, stones are carved into representations of corn and the Corn Maiden, who symbolizes life. Pick up some locally grown blue corn at Taos Pueblo’s Red Willow Farmers’ Market, every Wednesday.

9. Tamales Wrapped like presents in corn husks, tamales are a Christmas must, but the steamed blue or yellow cornmeal-and-lard pouches also make a great year-round lunch or dinner.

What makes it ours? The use of blue cornmeal and/or red and green chiles in the pork filling.

Found in burritos, enchiladas, huevos rancheros, and fried as chips.

11. Chicharrones Small pieces of pork (composed of meat, fat, and skin) are slowly simmered and fried in their own fat. Often served in burritos, or as a snack, they are a comfort food to those in the NM know.

What makes it ours? In Mexico, chicharrones are synonymous with the airy pork rinds, and are commonly packaged as potato-chip-like salty snacks.

12. Chicos These smoky, chewy corn kernels are traditionally first horno-roasted on the cob overnight, then dried on rooftops. Buy them at loschileros.com, or from Jesus Guzman at the Santa Fe Farmers’ Market.

Found in its namesake dish, a cooked-down mixture of pork, chile, onion, and oregano. The traditional family recipe of Margaret Naranjo, from Santa Clara Pueblo, includes bison and green chile, and she graciously shared her recipe with us; it’s at mynm.us/chicosnmm.

13. Posole Traditionally served during pueblo feast days and at winter holiday celebrations all over the state, this hominy-like stew, packed with its namesake ingredient of nixtamalized corn, comes with most classic New Mexican combination plates.

What makes it ours? “Posole in Mexico [spelled pozole there] is more of a main dish, usually covered with cabbage, and a lot of condiments,” Bill explains. You don’t find it in Tex-Mex; in New Mexico it’s almost a required side dish (instead of rice as in Mexico or Texas).

14. Beans These whole (not refried) beans, primarily pinto but also bolita and Anasazi, are most New Mexican when they leisurely simmer in a micaceous pot made of local clay (available at pasquals.com). A regular pot works fine, too, but a pressure cooker gets the frijoles ready in a reasonable after-work time frame.

Found in burritos, with chile and chicos, and as a side.

15. Calabacitas Sliced or cubed zucchini and yellow squash—sautéed with garlic and onions and then combined with corn and green chile, although variations are legion—is a popular summer vegetable side dish.

What makes it ours? Ours has green chile; Mexico’s has tomatoes. Squash, along with corn and beans, was grown and eaten by Native people here prior to contact with the Spanish.

16. Horno Bread On pueblos throughout New Mexico, you’ll notice beehive-shaped earthen ovens out in people’s yards. Hornos were brought to this land by the Spanish, and adopted by the indigenous people, but long before that, Moorish people brought this style of oven to the Spanish. Horno bread, with a thick crust and pillowy interior, is often made in big batches. One variation contains green chile and cheese. At the Gallup Farmers’ Market, you can buy sourdough horno bread, a nontraditional iteration by Zuni baker Jimmy Paywa.

17. Navajo Fry Bread The Diné people made fry bread out of the bags of rancid, bug-infested flour given to them by the U.S. Army after the Long Walk divorced them from their homeland and their traditional sources of nourishment. Fondly claimed by contemporary Puebloan and Diné people today, fry bread has transcended its bitter beginnings.

Found in Navajo tacos (as the shell), Navajo fry bread burgers (the bun), or sprinkled with powdered sugar on its own.

18. Sopaipillas Yes, they’re fried pockets of dough, but no, they’re not greasy; a thin, crispy outside gives way to a soft, stretchy inner layer.

Found in the north, as a main course stuffed with meat and smothered with chile and cheese, as a dinner side served with honey, or as a dessert in the southern part of the state.

19. Piñon This beloved nut from piñon trees is much like the Italian pignoli or pine nut. Locals aver that a good crop comes along only once every seven years. You can pick them up from trucks parked on the side of the road—you’ll recognize them by the rudimentary hand-painted PIÑON sign on the side—or order them at pinonnuts.com. 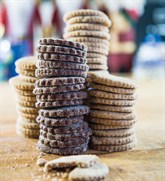 20. Biscochitos If you tried to sell people on cookies containing lard and aniseed in any other state, it’d be rough going. But here, this cinnamon-dusted, scallop-edged shortbread elicits rapturous sighs and reminiscences of the ways beloved abuelas, madres, and tias made them oh so perfectly. That is, after the cookies are all gone.

Found in Christmas potluck table offerings, but eaten all year round.

12 Of Our Readers Favorite Restaurants (and What to Order!)

Managing editor Candace Walsh is the author of the foodie memoir Licking the Spoon: A Memoir of Food, Family, and Identity (Seal Press), a New Mexico-Arizona Book Award winner. Follow her on Twitter @candacewalsh. 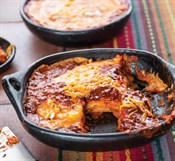 The ultimate New Mexico enchilada, this molten melding of chile, cheese, and corn tortillas can never be dismissed as ordinary food—and it’s even more of a classic topped with an over-easy or sunny-side-up egg. If you are serving multiple people, you can make four or more stacked enchiladas on a baking sheet if you wish, then carefully transfer the stacks, after broiling, from the baking sheet to serving dishes.

Makes 1 serving (multiply by the number of servings you need)

Take a knee, and take a breath